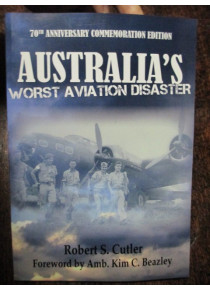 On the 14 June 1943, a United States Army Air Forces (USAAF) Boeing B-17 Flying Fortress aircraft which had just taken off from Mackay crashed approximately 8 kilometres south of the airfield﻿ at Bakers Creek. The crash claimed 40 lives and there was only one survivor.

The air crash remains to this day Australia's worst aviation disaster.
This war book is the complete story of the disaster, from the B17 aircraft which had previously been on bomber duties at Batchelor Field near Darwi﻿n NT, the men who lost their lives, the survivor, and the memorial.

The detailed text is supported by many scarce photos of the crash and men.