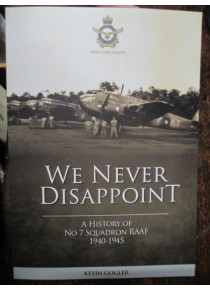 The WW2 RAAF History of No. 7 Squadron commenced at RAAF Base Laverton on 27 June 1940 when the Sqn was reformed for the first time since WW1﻿.

Initially, they were responsible for convoy escort flights and anti-submarine surveillance. After operating out of Nowra, New South Wales the squadron moved to Ross River near Townsville where it undertook convoy escort patrols.﻿ To better detect the Japanese Navy from April to October 1944 the squadron was based at Horn Island. As the Allied front advanced the Sqn moved to Tadji in New Guinea.

Later 1944 saw the squadron supporting the Australian 6th Division flying frontline strike missions against the Japanese. At wars end the Sqn was disbanded at Tadji on 19th December 1945.
The Sqn flew Lockheed Hudson (Jan 1940 to August 1942) and DAP Beaufort (Aug 1942 to Dec 1945).﻿﻿

DAP Beaufort was an Australian made aircraft. The Beaufort was a torpedo-bomber of which a later variant was named the Beaufighter.

The author’s Father was a pilot with the Squadron during WW2. The family history interest has lead the author in a quest to write a very large and comprehensive history of RAAF No 7 Squadron operations during World War 2.
Importantly, there is a nominal roll, operating crew list, accidents list, on strength Aircraft list with historical notes ++ various other named lists, pics of aircraft and men.