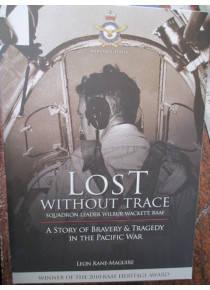 In September 1944 a Beaufighter from No 31 Squadron, RAAF, crashed in the Northern Territory following a strike mission over Japanese-occupied Timor. Although evidence was discovered some time later that the two-man crew of the aircraft had survived the crash, no trace was ever discovered of what became of them.

The pilot of the lost Beaufighter was Squadron Leader Wilbur Wackett, the 23-year-old son of Lawrence Wackett—himself an ex-RAAF officer who became well-known as one of Australia’s leading aircraft designers. Wilbur had followed his father’s footsteps into the Air Force before the war, and was a veteran of the air campaign in New Guinea where he had already survived being shot down and avoided certain death at the hands of the Japanese.

This book highlights the flying career of Wilbur Wackett and describes the catalogue of tragedy that unfolded with his mysterious end. ﻿