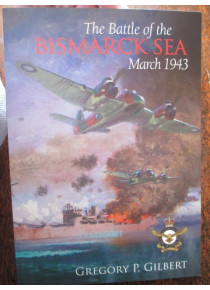 The Battle of the Bismarck Sea Beaufighter Hudson

The Battle of the Bismarck Sea by Gregory Gilbert : new book

Battle of the Bismarck Sea﻿

2013 marked the 70th anniversary of the Allied attack and destruction of the Japanese forces escorting the Lae Resupply Convoy on 3 March 1943. The Allied victory was so absolute, that eight transport ships and four escorting destroyers were sunk for the loss of only six Allied aircraft. Fifteen minutes - that’s all it took to strike a decisive blow in the Pacific War; however, to many Australians, the Battle of the Bismarck Sea is just one of the many battles fought over the course of the World War II.

While the critical stage of the fighting occurred during a 15 minute window on that early March morning, it was the detailed strategic and operational planning that allowed the Allied forces to exploit their increased air superiority over the Japanese, and destroy their campaign plans in the Pacific. The attack on the convoy was a true show of strength from the Allies, not only in terms of control of the air, but also in the battle of minds, breaking the spirit of the Japanese forces  by exposing their strategic weaknesses and effectively ending their threat in the South-West Pacific region.

‘The Battle of the Bismarck Sea’ details and analyses the planning and preparation of both Allied and Japanese forces leading up to the battle, description of the battle itself and discussion of the aftermath, including stunning photographs taken during the fighting by renowned wartime photographer Damien Parer.