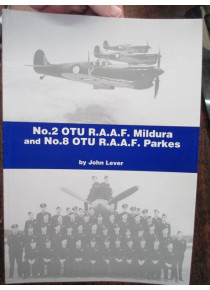 RAAF No 2 Operating Training Unit OTU Mildura and No 8 Otu Parkes' by J. A Lever. Both RAAF No 2 OTU & No 8 OTU were Spitfire Mustang Fighter Training Unit. ﻿

Not only gives a great history of the units but also RAAF Mildura Victoria and RAAF Base Parkes. Has a number of training manuals reprinted in portion in the pages of the book. A detailed text is supported by numerous personal photos of the bases , airman many named group pics, aircraft and Honour Roll. Reading the book I found that there was a great amount of information on other OTU Units operating in Australia.

Parkes was primarily a training base during World War II, Parkes housed a wide variety of units, including No 1 Air Navigation School, No 2 Wireless Air Gunners School, No 8 Operational Training Unit and the Central Flying School. After the conclusion of hostilities, No 87 Squadron briefly operated from the base. All RAAF presence was gone from the airfield by 1946.﻿

RAAF Base Mildura was established to provide operational training for fighter pilots. Initial flying with No 2 Operational Training Unit (OTU) commenced in May 1942, and during the course of the war, 1247 pilots graduated from the unit, with over 104 000 hours flown, and 53 trainees killed in flying accidents. ﻿