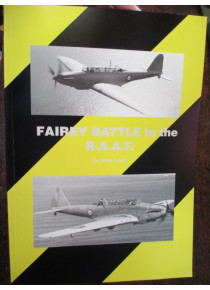 Fairey Battle in the RAAF by J Lever :new book

The Fairey Battle was a British single-engine light bomber.
Royal Australian Air Force received 366 aircraft which were used for training purposes.
This is the History of its service and the people who flew and kept it flying.
The Battle was used for future Lancaster crews destined for Bomber Command Britain. The book follows many of the crew into their Lancaster service.