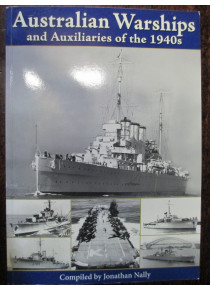 AUSTRALIAN WARSHIPS and Auxiliaries of the 1940's compiled by J Nally

Written in a catalogue by alpha format of War Ship name.

The 1940s - in particular, the period of World War II - were the busiest years for the Royal Australian Navy (RAN) during the 20th century. At the beginning of War, the RAN's fleet comprised fewer than 20 large surface combatants and various smaller support craft - by the end of the War, it numbered around 150 large vessels plus numerous support and ancillary craft. The exigencies of the War had required a huge boost in the Navy's combatant fleet, and so a programme of shipbuilding and acquisition had been begun. Some vessels, such as the Bathurst-class Austrlian minesweepers wee built in Australian Shipyeards, while others (such as the N-and Q-class destoyers) were provided on loan from the Royal Navy. Some of those 1940s-era ships were to continue serving in the Ran for years, even decades, afterwards.