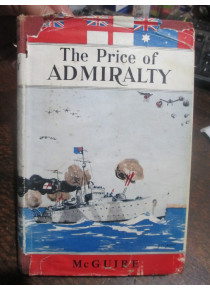 The Price Of Admiralty ' by P McGuire

The Price Of Admiralty ' by Paul McGuire written as a memorial to the Australian Navy Commander Walker, Officers & Men of HMAS Parramatta.

Gives the full history of HMAS Parramatta with roll of honour of the Ships Company at time of sinking in November 1941.

HMAS Parramatta was torpedoed and sunk very quickily only 25 survived with the other 146 men including Commander Walker died with the ship. November '41 is said to be one of the worst periods for our RAN on the 19th November 1941 HMAS Sydney was lost due the Kormoran Battle.