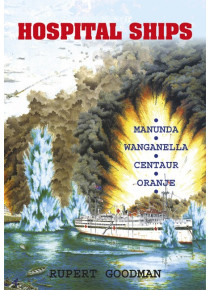 This war book has long been out of print, and has been sought after for sometime.

As a Hospital Ship the Manunda completed four voyages to the Middle East between November 1940 and September 1941. On the morning of 19 February 1942, despite displaying the highly visible red cross markings ﻿the Manunda was bombed by the Japanese while anchored in Darwin harbour.  Twelve members of the ships' crew and hospital staff were killed, 19 others were seriously wounded and another 40 received minor wounds. She was able to maintain hospital duties during the bombing of Darwin.
Later in the war the Manunda served in the New Guinea campaign making a total of 27 voyages from Milne Bay to Brisbane and Sydney transporting wounded troops.

During the war she carried approximately 30,000 casualties to safety. After the war the  Manunda was one of the ships sent to Singapore to repatriate civilians﻿ and POWs.
It would seem the Japanese finally got their way, when in 1956 she was withdrawn from Australian service and sold to the Japanese where she was broken up the following year.﻿

The most well known hospital ship of WW2 was the Centaur, unfortunately due to her nortorious sinking on the 14th May 1943. She was torpedoed by an unsighted submarine﻿ obviously believed to be Japanese.
Most onboard were asleep at the time of the attack and she sunk in only 3 minutes thus of the 332 people on board, only 64 were rescued. Although, the wreck lay not far from Moreton Island in Queensland it's position would remain a mystery until being located in 2009.
Much investigation was made to find the Japanese responsible for the war crimes of sinking the well lit Hospital ship. However, claims ﻿could not be proven and no one ever stood trial for the crime. The main culprit died in 1991 without defending himself or denying the claims.﻿

After the sinking there was some effort made to take markings off of the remaining Hospital ships and have Australian Navy escorts stationed.  ﻿