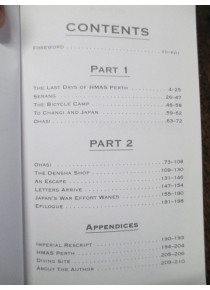 War Diaries Japanese POW by F Lasslett.﻿ Fred Lasslett, ﻿the author, was a sailor on HMAS Perth.﻿ After active duty in the Mediterranean, Fred, aboard the HMAS Perth, was transferred to the Indonesian waters in 1942 to take up the fight against the Japanese in Southeast Asia.

Fred's diaries take the story from here and vividly described the encounters with the Japanese near Surabaya, Battle Sunda Straits, capture by the Japanese and imprisonment in Java, his escape and the days on the run, subsequent recapture and facing aspiring squad, life and entertainment in the 'bicycle camp', transferred to Changi and Japan, accounts of the day-to-day life as a Japanese POW.
Would be of immense interest to anyone researching HMAS Perth both ship and men.﻿