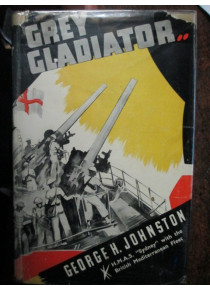 This book is the story of HMAS Sydney during 7 months war service in the Mediterranean during World War II.﻿ The actual period documented is from June 1940 to January 1941.
This book was actually written in 1941 before the sinking of the Sydney on 19 November 1941 in a battle with the disguised German raider Kormoran﻿.

During these operations in the Mediterranean she was deemed in this book to be a lucky ship. Under the command of Captain John Collins she had considerable success in operations culminating in the﻿ sinking of the Italian cruiser Bartolomeo Colleoni.﻿

Upon her return to Australia, Captain Collins was transferred and the Sydney undertook various duties including escort work out of Perth.
The Rest as they say, is history.﻿
Have a look at how well the Sydney is preserved - quite remarkable and the video is so clear.
Click to see HMAS Sydney wreck movie.