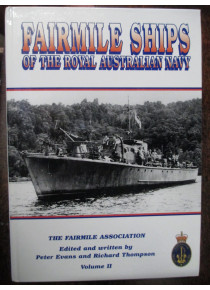 During World War Two, the Royal Australian Navy decided to employ Fairmile ships, to provide a fast craft for escort duties, anti­submarine activities, carrying commandos and raiding Japanese-held bases.Many were built in Australia and Volume I of this series described their construction and service in Australian and nearby waters.

This long awaited second volume covers the New Guinea and island operations of Fairmiles and HDMLs through to war's end. They had various duties, including dropping and recovering Z Special units, hunting enemy submarines and barges, strafing Japanese coastal facilities and one crew shot down a Zero.

Told mostly through the words of officers and crewmen, their actions and adventures come alive as they describe what occurred. The authors have also included Air Sea Rescue craft, `mother' and auxiliary ships, surrender activities, communications and armaments.

This fine book fills an important gap in the proud history of the Royal Australian Navy during World War Two.

This second volume was compiled by Peter Evans, the author of the earlier book but sadly he passed away before he could finish the project. The completion of Volume II was undertaken by R.J. `Dick' Thompson, who served as a Signalman in a destroyer and then for 25 months in a Fairmile.