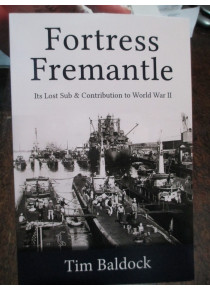 During World War II, it was via Fremantle that Australia maintained strategic communications with the Middle East and Britain. Indeed, such was the importance of the Western Australian port that it became the third most heavily defended location in Australia (along with Darwin and Sydney). After the start of the Pacific War Fremantle also became a key submarine base: it would ultimately be the second biggest Allied submarine base in the world.

Fortress Fremantle details the defences built to defend the port. This was no easy task as Fremantle had no natural harbour such as Darwin and Sydney, and ships had to anchor offshore in Gage Roads as they awaited a berth. The answer was the construction of the Oliver Hill battery of 9.2-inch guns on Rottnest Island. This was backed up by an array of coastal defences on the mainland which stretched from Swanbourne in the north to Point Peron in the south.

During the course of the war Fremantle also became an increasingly important submarine base. Amazingly, it would be the second biggest Allied submarine base in the world with some 170 American, British and Dutch boats operating from there. These submarines waged war against the Japanese deep into their territory of the Netherlands East Indies and beyond.

Fortress Fremantle also discusses life in the port during the war years, the loss of HMAS Sydney off the WA coast, Japanese invasion plans and associated themes including the roles of battleships and aircraft carriers. The book is dedicated to the Fremantle-based USS Bullhead, the very last US warship lost during the war in August 1945.﻿