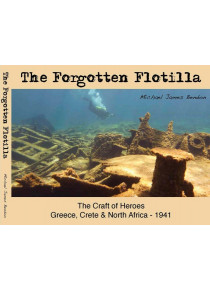 The Forgotten Flotilla: The Craft of Heroes - Greece, Crete and North Africa 1941
by Dr M. Bendon

The Forgotten Flotilla book tells of the feats accomplished by previously unknown heroes and their vessels in 1941.

Dr Michael Bendon has identified two wrecked Tank Landing Craft Mk1 off the western coast of Crete. He follows their incredible story, from their being ordered by Churchill as a new type of landing vessel and their deployment to the Mediterranean, through to the crucial role they played in the evacuations of Greece and Crete.

Amazingly, he has found the commander of one of the boats still alive and well in England. The skipper's story runs throughout the book and adds a more personal dimension to The Forgotten Flotilla.﻿