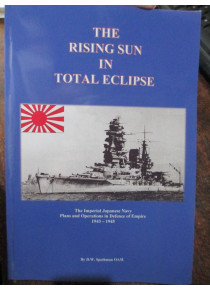 This Book is a study of the Defence of Japan and Empire by its Navy. The book begins when WW2 in the Far East was almost thirteen months old. At this time, the Japanese Empire had already reached the limit of its expansion by August 1942 and the American counter attack in the South Pacific began on the 7th of that month, with the landings at Tulagi and Guadalcanal.

A total of four aircraft carrier battles were fought in six months during 1942. However another would not take place for a period of twenty months, until June 1944.﻿
Battles covered include:
The Solomons
The Indian Ocean
Battle of the Philippine Sea Morotai Peleliu Ulithi
Battle of Leyte Gulf
Okinawa Luzon Borneo
Surigao Strait
Samar
Biak
Empress Augusta Bay
Kolombangara
Kula Gulf
Battle of the Bismarck Sea