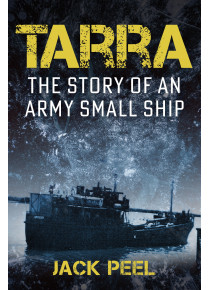 Tarra The Story of an Army Small Ship

Tarra The Story of an Army Small Ship by J Peel

The book, Tarra describes the 25 years of service provided to the nation by a 125-foot Wooden Cargo Vessel, operated by the Australian Army from her launch in 1945 to her abandonment in huge seas off the north coast of New South Wales in 1965. During the war in the South Pacific, the only mode of transport available to provide food ammunition and supplies to the fighting forces and civilian population to the north of Australia, other than aircraft and pack horses, was seagoing small craft and small ships.

The Tarra story follows her launch in Tasmania in 1945, when the ship was employed in dumping ammunition off the east coast. Based in Newcastle and later in Cairns, she was seconded to the Graves Registration Unit during the establishment of the Bomana War Cemetery, and then lent to the civil authorities to collect copra from remote islands. Tarra provided the only form of transport for materials and personnel for the construction of the Vanimo Outstation of the Pacific Islands Regiment on the Indonesian border in 1952, and she continued to resupply the
Company base for the next ten years, making two voyages per year from Brisbane.

Tarra and her sister, Vasse, played a key role in training soldiers to become sailors, particularly in the Citizen Military Forces and in the development of the Australian Regular Army after the war and during the Pentomic experiment. In declining condition, she was sold to the Societe Marine Caledonian and renamed Milos Del Mar in April 1965.