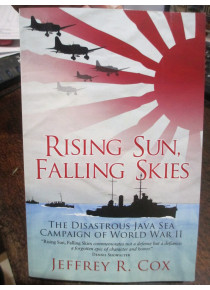 One of the most devastating battles of early WW2 were those suffered during the Java Sea Campaign, where a small group of Americans, British, Dutch, and Australians were isolated in the Far East - and directly in the path of the Japanese onslaught. It was to be the first major sea battle of World War II in the Pacific. The Australian Cruiser HMAS Perth and USS Houstan were sunk in the Sunda Straits.