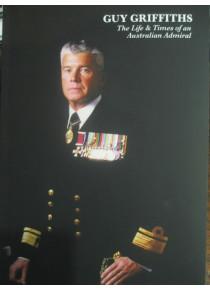 $40.00
Guy Griffiths Life and Times of an Australian Admiral by P Jones

Guy Griffiths was born in Sydney on 1 March 1923 and grew up in the Rothbury/Pokolbin district in the Hunter Valley, NSW. In January 1937, when only aged 13, he entered the Royal Australian Naval College as a Cadet Midshipman . He excelled and was made the Chief Cadet Captain of the College in 1939. After graduation from the College in late 1940 he was posted to the Royal Navy for further training. Midshipman Griffiths joined the battle cruiser HMS Repulse in March 1941.

He was present on the Repulse as the exhilarating chase took place, hunting down the Bismarck during WW2. Afterwards the Repulse and thus Griffiths were rushed to the defence of Singapore. Griffiths worked in the range room of the Repulse. On the 10th December, Repulse and Prince of Wales arrived in Singapore Harbour forming part of Force Z to help secure the island. The Japanese had control of the air and the two ships although showing a brave offensive, lacked the necessary air cover. Likewise with most Allied command during the early days of WW2 they grossly underestimated the Japanese armed forces.

On 10 December 1941 HMS Repulse and HMS Prince of Wales were sunk off the east coast of Malaya, by Japanese air attack. After his rescue, Griffiths was posted to the battleship HMS Revenge. He was promoted to Sub Lieutenant in 1942 and, in early 1943, he served briefly in the destroyer HMS Vivian before joining the cruiser HMAS Shropshire, on commissioning, in May 1943. During the next two years he saw action in the South West Pacific, including the battles of Leyte Gulf, Lingayen Gulf and Surigao Strait during the fighting to liberate the Philippines. He was promoted to Lieutenant in 1944 and awarded the Distinguished Service Cross in May 1945 "For gallantry, skill and devotion to duty while serving in HMAS Shropshire in the successful assault operations in the Lingayen Gulf, Luzon Island".

Griffiths would go on to fight in another two wars Korea (HMAS Sydney) and Vietnam. He was gunnery officer on the then new aircraft carrier HMAS Melbourne. Thus the book has a wide appeal for navy researchers throughout WW2 and the cold war period. He commanded HMAS Parramatta and HMAS Hobart (II). The book has additional family history interest for the life and times as a crew member on these ships mentioned.