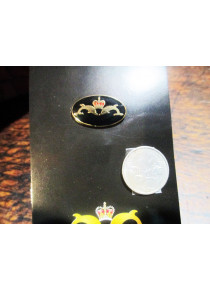 On offer is the lapel pin seen above of the Royal Australian Navy Submarines insigna. All metal clear enamel - 23mm length - with easy fit back clasp.

Commemorative pin can be worn by anyone - supporters, veterans and family

History original design
This actual design was the work of Commander McIntosh (Australian Navy), the submarine project officer in 1965. The Dolphins on his submarine supporter’s tie inspired it; the crown was drawn from the florin (the two shilling piece before decimal currency was introduced). Stokes, of Melbourne, who manufactured many service badges, produced the Badge. Stokes reported that it was by far the most handsome badge his firm had made.

The use of dolphins to connect submariners was first attributed to the USA Navy when in 1923, Captain E. J. King, Commander of the Submarine Division Three, suggested the use of the dolphin in the similar US Navy design.