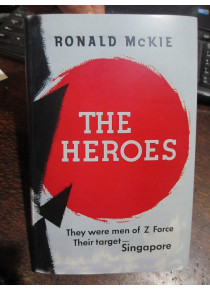 The HEROES  by R McKie.

The HEROES ". by R McKie. First published 1960. The Heroes tells of two secret Z Special Unit raids from the sea on Japanese occupied Singapore during the darkest days of the 2nd World War. Launched from Australia the 1st raid was an incomparable success - the 2nd a total and tragic failure. It is a story of unsurpassed courage and sacrifice that a recounts the exploits of the men that took part in the raids - and of the tiny Krait that carried them 1st to glory and the men to death.

McKie tells this story, in all its astonishing detail, from both sides, thus it vividly records the bravery of war and the men in the face of war. The MV Krait was a wooden hulled vessel famous for its use during World War II by the Z Special Unit (Z Force) of Australia during the raid against Japanese ships anchored in Singapore Harbour. The raid was known as Operation Jaywick.