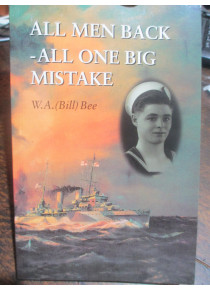 An amazing war book told by an Australian sailor, Bill Bee of his experiences immediately before and after capture by the Imperial Japanese Navy.

As a signalman on the flag deck of HMAS Perth, Bill (Buzzer to his mates) Bee gives an eye witness account of events leading up to debacle of the Java Sea Battle on 27 February 1942, and final annihilation of Allied Naval Forces defending Java on the 1 March 1942, in Sunda Straits.

Then as a Prisoner of War for 3½ years the author takes the reader on a journey that describes vividly the anxieties and perils he and his mates experienced while travelling over vast distances of land and sea to satisfy their captors' forced labour requirements. This includes building the Burma-Thai Railway to coal-mining in Japan.

The narrative begins in Fremantle when HMAS Perth arrives in February 1942 and finishes when the author returns home in Perth, Western Australia in 1945﻿