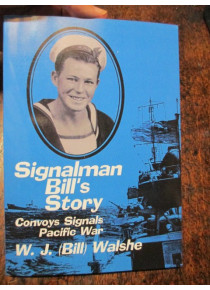 Bill Walshe grew up in Sydney during the depression years. On Turning 17, he joined the Navy as a signalman and served during WW2 1942-46. He worked on several ships as a convoy signalman he was attached to merchant ships . Around New Guinea he worked on the Taroona, HMAS Cerberus, Fleet Tanker Carelia and had a stay in Darwin during the war.
An interesting and scarce account of RAN convoy life WW2.