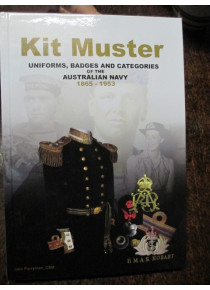 A History of the Uniforms, Badges, Medals, Caps and general attire used by Royal Australian Navy. Also is a general history of the RAN.

Originally in colonial times the Australian Kit was based on Great Britain's Royal Navy, with only minor differences distinguishing the two apart. Since those times the RAN kit has become quite different. This Australian Navy Book written by Senior Naval Historian John Perryman follows the history of Australian Navy attire from 1865 through to 1953. Thus the changes made to badges etc when Queen Elizabeth II ascended the throne are detailed in the book.

These uniform, badge catalogue type books are always sought after by collectors and prices escalate quickly after the book becomes out of print.

Importantly, this book stands as a tribute to the men and women who have worn the uniform of the Royal Australian Navy and is a valuable resource for those with an interest in uniforms and insignia.﻿