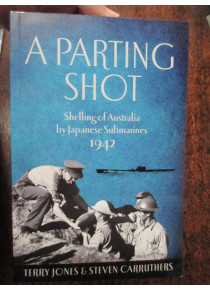 A Parting Shot Shelling of Australia by Japanese Submarines 1942

Indepth accounts and analysis of the shelling of Sydney and Newcastle in 1942 by Japanese submarines. Although casualties and damage were slight, the bombardments fuelled the real fear of an impending Japanese invasion, a fate dreaded by Australians for a century before 1942.

The narrative reconstructs the events that occurred in both cities and includes the search for, recovery and disposal of unexploded shells. In recounting this legendary tale of two cities, the book also examines Australia's east coast defences, the activities of the National Emergency Service, and the management and communications structures that were implemented during the early stages of the Pacific War.

To put it all into context, A Parting Shot also offers a Japanese perspective to the story through a critical account of Japan's submarine operations in Australian waters. Why did the Japanese launch submarine operations in Australian waters when they had no intention of invading? Were the bombardments revenge attacks following the Japanese defeat at Midway? What were the Japanese targets in Sydney and Newcastle? Were all the unexploded shells recovered? A Parting Shot answer these and other long-standing questions, dispelling many rumours and urban myths surrounding the Japanese submarine attacks.
﻿