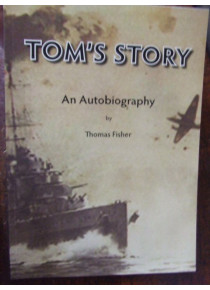 When Tom Fisher was growing up on a farm in Western Australia in the 1920's, and during the Depression of the 1930's, he could never have imagined that he would take part in some of the toughest naval battles of World War II.

Able Seaman Tom Fisher commenced his war service on 3 September 1939 and, except for a brief period in late 1945, served at sea throughout the war. His first ship was HMAS Sydney and he was present at the now famous action when the Italian cruiser Bartolomeo Colleoni was sunk in 1940. Tom left the Sydney only a few weeks before her last fateful battle with the Kormoran. He then served in the cruiser Hobart during the bitter fighting in the Dutch East Indies, Coral Sea and the Solomons and later escaped death again when the Hobart was torpedoed in 1943.
Tom then went on to serve in the destroyers Stuart and Quiberon in more heavy fighting in the Indian and Pacific Oceans. After leaving the Navy, Tom tried to adjust to civilian life after seeing so many of his friends killed or maimed. Despite the hardships of war it was the difficulty of peace that saw him confront his greatest battles. At 91 years of age, Tom credits his wife, Shirley, and his Catholic faith with saving him and allowing him to enjoy an old age that many of his shipmates did not. Tom's Story is the story of a humble man whose body, mind and spirit were put to the test in the crucible of war and the long hard years of 'winning the peace' that followed.
About the Author Tom Fisher was born in country Western Australia in 1921 and grew up in Perth during the Depression . He joined the Royal Australian Navy when he was 18 and served in HMAS Sydney, Hobart, Stuart and Quiberon. Demobilised in 1946 he struggled in his early civilian life until his marriage and religion saved him. For many years he worked for the Royal Automobile Club (RAC) while he, and his wife Shirley, raised a family of five children.
This is his story.