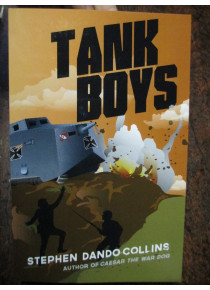 A gripping story that brings to life one of Australia's
WW1 military victories.

Tank Boys is a fictional story based on fact written for early high school grades.

Follows young members of the crew of the massive German tank Mephisto as it powers towards the battle lines at Villers Bretonneux, France. The men of the opposing allied tanks and Australian Infantry are ready to oppose the Mephisto. War is about to change forever...Based on true stories of the world's first tank-versus-tank battle and what it was like to be an underage soldier in World War I, Tank Boys follows Frankie, Taz and Richard's footsteps as they take part in what will become one of the decisive battles of the war. What will happen when the boys meet as enemies on the battlefield? ﻿