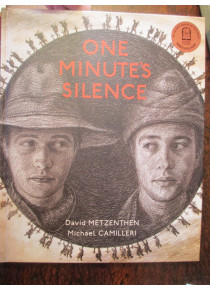 This children's book has been shortlisted for the
Australian Children's Book of the Year Award.

The young﻿ reader is reminded of what they should think of during the One Minute's Silence at the Armistice Day Ceremony﻿.

Putting themselves in the place of the young soldier running across the beach of Gallipoli, the Young Turk standing against the oncoming Australians. What would it be like to run against the maddening splatter of a machine gun, the Turkish soldiers who charged again and again, to hear the cries of wounded, Turkish fighters standing strong and straight in freezing trenches or the promises given to never forget the boys who would not wake to whispered farewells.﻿

Unusual that most of the children's books are softcover but this is the 1st I've seen with a hard cover.﻿