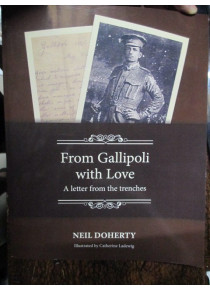 From Gallipoli with Love A Letter from the Trenches | Kids Book

From Gallipoli with Love﻿ by N Doherty : new book

The Author's family recently found a WW1 letter in an old wooden chest among other treasures, at the original family cottage at Kulpi, Queensland.﻿

Neil Doherty's Grand-Uncle Mick wrote the letter to his sister (Neil's grandmother) from the trenches of Gallipoli in May 1915.

This children's Australian gallipoli book is a personal account, from information found in the letter which was written in the trenches only weeks after landing on 25 April 1915. This letter graphically describes his experience near 100 years ago at Anzac Cove; and gives an inspiring and touching insight into the character of an Anzac Digger, a man fighting for his life and his country.﻿

A copy of the letter is included with the book.