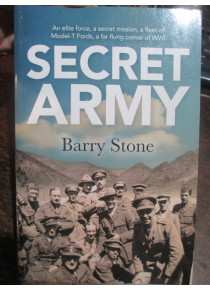 This elite force secretly was assembled in London in late 1917. Barry Stone tells the story of these Australian, British, New Zealand, Canadian and South African men who were sent to the ethnic powder keg of the Caucasus to preserve British interests. They matched wits with German spies and assassins. They fought the Turks.

They dined with sheiks, outraged local mullahs, forged unlikely alliances with Russian Cossacks, helped Armenians flee genocide, and saved the lives of thousands of starving Persians. This book is a rarity: a story set against the backdrop of war, filled not with bloodshed but with acts of kindness and selflessness; a triumph of the human spirit.