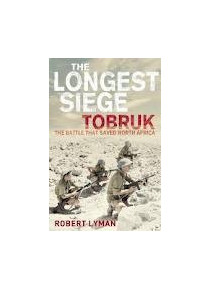 The Longest Siege: Tobruk, The Battle That Saved North Africa by R.Lyman

The Longest Siege: Tobruk, The Battle That Saved North Africa

Beginning on 10th April 1941, and lasting for 240 days, the siege of Tobruk is a mesmerising tale of human endurance and heroism. It is an epic story of extraordinary resilience as the Libyan port's 24,000 defenders met increasingly desperate attempts by Rommel's Panzer divisions to break through the hurriedly thrown-up defences. It was a battle of bayonets and grenades against tanks, of David versus Goliath.

The eventual allied victory came against overwhelming odds, plus the morale sapping knowledge that the defenders were surrounded on one side by the sea, and on the other by Hitler's men and machines (who, only the year before, had brought Western Europe to its knees). Tobruk was defended in the main by the Australian 9th Division, followed by the British 70th Infantry Division who then linked up with the advancing 8th Army. The Royal Navy also played an important role in Tobruk's defence. By December 1941 Rommel had been beaten and forced to withdraw his forces from Cyrenaica. The siege was lifted and the exhausted, gallant defenders able to march out in triumph.