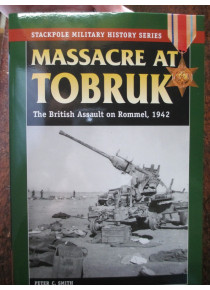 Massacre At Tobruk﻿ by P. Smith

Much is written about the Rats of Tobruk and the famous siege which took place in 1941/42. But in June 1942 the city did fall to Axis troops of the Afrika Korps. This is the story of the recapture of Tobruk in November 1942, when the city was attacked by the Allied 8th Army. The resulting Axis retreat caused considerable loss to Rommel's forces - Massacre at Tobruk.