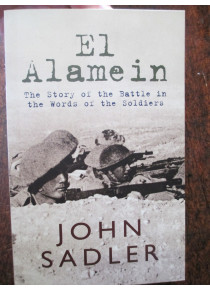 El Alamein: The Story of the Battle in the Words of the Soldiers By J. Sadle

The epic battle in Egypt between the Allies 'Desert Rats' (including Australian 9th Division) and the Axis forces led by Rommel, the 'Desert Fox'. On the night of 23 October 1942 British artillery thundered across the desolate sands of North Africa to herald the greatest Allied offensive of the Second World War. Churchill would describe the crucial and savage days of intense fighting which followed, as 'the end of the beginning'.

El Alamein was the battle that defined both the Afrika Corps and the British Allied  8th Army, the legendary 'Desert Rats'.

Hitler's fanatic insistence that his forces should not cede ground, caused the destruction of a significant part of Rommel's army. Like Stalingrad, it marks the end of the opening phase of Axis victories and sweeping gains and ushered in the slow but inexorable drive to final Allied triumph.
This is the story of El Alamein and the Allied soldiers who fought in it.﻿