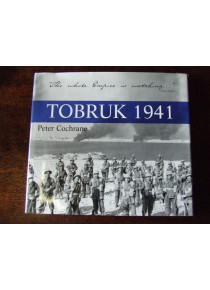 TOBRUK 1941 ' by P Cochrane
A fascinating, intense and moving view of everyday survival and fortitude
in near unendurable circumstances during the seige of Tobruk. When the 9th Division
of the AIF withdrew into the Libyan fortress town of Tobruk early in April 1941,
a siege began that was to make its mark on the course of WWII and the popular
memory of a nation. Tobruk 1941 reveals in startling and poignant detail the
facts of day-to-day life during the siege. It shows the grim work of the soldiers
and anti-aircraft gunners on the front line, the ceaseless battle for the harbour,
and the bravery of the photographers and journalists who covered the seige.
It illuminates in myriad ways the toughness and the resilience of the soldiers
as they battled the heat, the flies, the rats, the boredom and the savagery
while doing their bit to win the war.

Well Known for the great photograph prints - so clear and real.
100% Australian Tobruk.

Good one for medal or genealogy research !