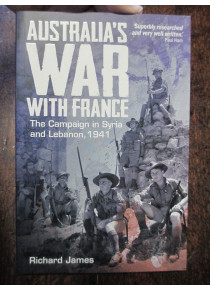 Book About Australia's War With France in Syria WW2.

Australia's War with France The Campaign in Syria and Lebanon, 1941 by R. James

It's interesting to reflect, in these current times of turmoil in that region, that Australia captured Damascus twice during its short history once in World War I and the other in World War II.﻿

This book tells the WW2 story of how our Australian 7th Division came to fight against the Army of the Levant, Australia against the Vichy French in Syria. The battles took place in the rocky hills of Lebanon and the greater barren wastes of Syria.

Contrary to Churchill’s expectations, the French resisted viciously.
The Australians won the war, but at the price of more than 400 young men, sons of Anzacs who had fought to defend France in the trenches of the western Front. The British were embarrassed, the campaign was forgotten, and the Australians who fought were dubbed ‘the silent men.’

No contemporary Australian historian has studied the conflict. Confident that this is the first Australian study dedicated to the Battle. British and French accounts exist, but fail to do justice to the Australian contribution.

Through interviews with the veterans, archival records, and on-the-ground research, this book seeks to understand a neglected campaign and give it a proper place in Australian history.