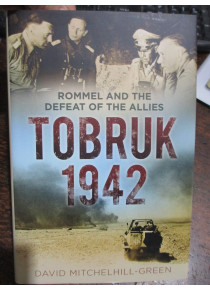 TOBRUK 1942 Rommel and the Defeat of the Allies

Utilising a wealth of primary and secondary sources the author examines why the fortress fell to Rommel’s Axis forces in just 24 hours when it held out for 241 days against repeated attacks the previous year (the Siege of Tobruk - Rats of Tobruk fame).

Panzerarmee Afrika attacked Tobruk with massed air support, penetrated a weak spot on the eastern defensive perimeter, taking Tobruk and 33,000 prisoners, many of the garrison on the western perimeter not having been involved in the fighting.

The surrender was the second largest capitulation (1st is the Fall of Singapore) by the British Army in the war. Comparing the 1941 and 1942 battles, this book presents a new perspective on Tobruk the isolated Libyan fortress. Not withstanding the capture of vast ammunition stores, 2000 usable vehicles, 2000 tons of fuel, 5000 tons of general stores.