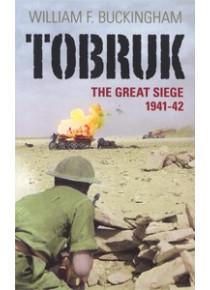 TOBRUK The Great Siege 1941-2 ' by William F. Buckingham.
For Australians, TOBRUK is an iconic battle of World War II, yet few people
know the history of the siege or even the bare details of what happened. In
1941 the Battle of Tobruk was fought by allied troops (of which more than 15000 were Australian) against Adolf Hitler's formidable Afrika Korps. The 2ND
AIF's defence of the harbour city of Tobruk against the Afrika Korps' armoured
division is not only an Australian legend but it is one of the great battles
of all time. Rats of Tobruk.