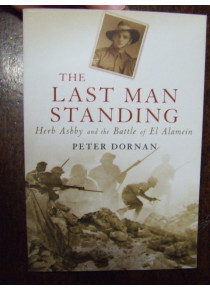 Where was the rest of the company? Why is no one else firing? A quick look behind revealed the shocking truth. Herb was alone. No one was following there was no one able to follow. He was the last man standing.'
The Australians played a crucial role in the Allied victory in the Battle of El Alamein, one of the turning points of the Second World War. Rommel said after the battle, I could have won North Africa with a division of Australians under my command'. Yet victory came at a heavy price, with more than a thousand Australians lost in the battle.
Peter Dornan tells the story of the Battle of El Alamein through the eyes of Herb Ashby of the 2/48th Battalion, who at eighteen years of age left his home in Mount Gambier to fight a war on the other side of the world. Herb Ashby was wounded in the Siege of Tobruk and was decorated for his services in the Battle of El Alamein. With three Victoria Crosses awarded posthumously to his battalion during the campaign, including two to his platoon, Herb assisted the 2/48th to become the most highly decorated Australian battalion in the war.
Peter Dornan's The Last Man Standing is a vividly recounted story of tragedy and triumph, and tremendous courage in extraordinary times.