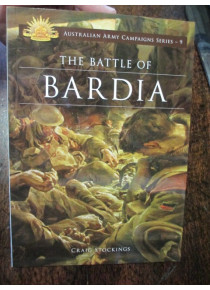 The Battle of Bardia by Craig Stockings : new book﻿

The Australian 6th Division on the 3rd January 1941 fought the successful WW2 Battle of Bardia a town in Libya. The Italian Army had made Bardia into a fortress. This was the first World War Two Battle that the Australians had planned and were also the main attack Army. It was seen in Australia as a major victory for the country's Army.
Later WW2 North Africa Battles such as Tobruk, Greece and Crete have had a much greater influence in today's history books.    ﻿
Although not encyclopedic, this military book has an extreme amount of detail including, Order of Battle, maps, personal biographies of soldiers that took part in the battle.
These Australian Army Campaigns Series of which this is number 9 have become very popular for their high detail for the specific Battle titled. The text is supported by nurmerous then and now pictures.
The Australian 6th Division lost 130 men killed and 326 wounded.