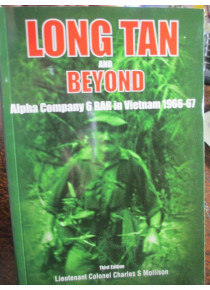 This book Long Tan and Beyond Alpha Company, 6 RAR in Vietnam 1966-67 is an authentic and fascinating account of young Australians involved in the Vietnam War.
The author, Charles Mollison, the proud and determine commander of Apha Company 6 RAR combines his own observations with the stories of his men to bring forward a captivating tale of soldiering and warfare. In doing so he captures the doubts and fears, the disappointments, frustrations, and more particularly the triumphs associated with the day-to-day survival of infantrymen at war. Mollison's A Company was the reaction force sent out in APCs to assist 6RAR D Company commanded by Harry Smith during Battle of Long Tan ﻿18 August 1966﻿. ﻿

Providing fast-moving first-hand accounts which will take you into the rainsoaked, bloody battlefield of Long Tan. Also covers other conflicts that the 6 RAR took part in during their tour of duty including the hell of Operation Bribie and into the jungle on countless ambushes, patrols and operations﻿.