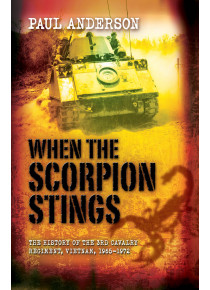 When the Scorpion Stings The history of the 3rd Cavalry Regiment, Vietnam, 1965-72

When the Scorpion Stings The history of the 3rd Cavalry Regiment, Vietnam, 1965-72 by Paul Anderson

An historical account of the 3rd Cavalry Regiment and the lives of the men who served within it.

When the Scorpion Stings is the official history of the 3rd Cavalry Regiment in South Vietnam, 1965-72.

The Regiment was the first unit involved in the establishment of the Australian Task Force at Nui Dat and the last to leave when the Task Force was finally disbanded. The versatility of the Armoured Personnel Carrier allowed the Regiment to function in dual operational roles: firstly as cavalry, and secondly as armoured transport support. In this way the unit became known as the workhorse of the Australian Task Force, with its daily routine constantly changing and virtually impossible to pin down. The unit's small size, yet extremely dangerous capabilities in action are reflected in the regimental emblem-a scorpion.

The Regiment participated in many of the major battles of the Vietnam campaign, including Long Tan in 1966, and often played a key role in the outcomes. However, until now its unique achievements have all too often been lost within the larger accounts of the various infantry divisions to which the Regiment was attached. For the first time, this account documents the role of the 3rd Cavalry Regiment-one of the most decorated Australian units that served in South Vietnam-and the lives of the men who served within it.