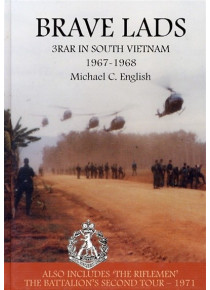 The Vietnam War Book ' Brave Lads ' is the military Battalion history of Australian Army 3 Battalion RAR Australians in the Vietnam War.
The book fills a gap in the Australian military experience in South Vietnam. Includes a Nominal Roll of Members.

The Third Battalion, The Royal Australian Regiment (3RAR) first served in Vietnam in 1968 and later had a second tour of duty in 1971.

In 1968 3RAR was based at Phuoc Tuy Province but also operated outside their area of operation as the need dictated. The until fought in the Tet Offensive in early 1968 and later operated in the Long Hai Hills where it sustained many casualties as a result of mines.

In May-June of that year, the battalion successfully held off several determined enemy attacks at Fire Support Base 'Balmoral', and with the Australian military commitment at its height, the battalion continued its active patrolling and ambushing at a high level of activity.

The loss of men due to illness or wounds, or for any other reason, were not usually replaced, which placed a strain on those soldiers still serving on operation. In the second tour (1971) the battalion again encountered problems but despite that, the unit showed a high degree of professionalism in its actions against an ever-aggressive and sometimes elusive enemy.

This history pays tribute to the Brave Lads of 3RAR in their tumultuous year in Vietnam where hard work and ever-present danger, were constant companions.

This is actually a compilation of two books in one. The first title "Brave Lads" is a new publication, the second "The Riflemen: A History of the 3RAR Second Tour of Duty in Vietnam" was first published in 1999.