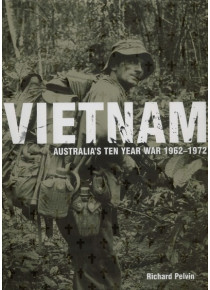 This Vietnam Australian War Book is  beautifully illustrated, powerful account of the Australian soldiers in the Vietnam War. Over 300 rarely seen photographs, pamphlets, letters, newspaper excerpt and diary entries bring to life Australia's key operations in the Vietnam War, including the famous Battle of Long Tan, and create an intimate portrayal of the very human side of battle. The debate over National Service, the television media coverage, and a reflection on the war's aftermath is also documented, here, in historical photographs.

'Vietnam' is a remarkable pictorial record of Australia's involvement in one of the most controversial and divisive wars of the 20th century.