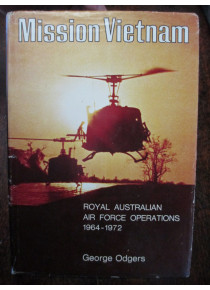 MISSION VIETNAM Royal Australian Air Force Operations 1964-1972﻿. An official history of the operations of the RAAF during the Vietnam War. Has pictures of many pilots who served during the conflict.

There are named lists in the appendix,  Awards for Operational Service in the Republic of Vietnam, list of the Officers Commanding and Commanding Officers RAAF Units in Vietnam.﻿