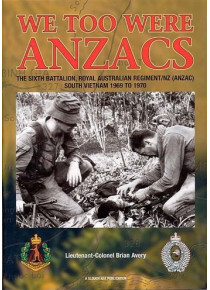 History of the 6th Royal Australian Regiment in Vietnam

We Too Were Anzacs The Sixth Battalion, Royal Australian Regiment/NZ (ANZAC), South Vietnam 1969 to 1970﻿ by B. Avery﻿

This Vietnam War book is a Battalion History of the Australian 6th Battalion RAR.

During its first tour in South Vietnam, 6RAR covered itself with honours as a result of its victory at Long Tan in August 1966.

This is the History of their 2nd tour of duty during the Vietnam War.

During its first major operation in June 1969, Operation Lavarack, this truly ANZAC battalion which included regular soldiers, National Servicemen and Kiwis, soon showed what a professional unit it was by dominating the enemy Main Force units in Phuoc Tuy Province, by aggressive minor tactics, patrolling and well sited ambushes.

Throughout its year-long tour, 6RAR/NZ participated in nine major operations, inflicting heavy casualties upon the Viet Cong. Unlike the battalion's earlier tour, the fighting was mainly at platoon level, with scores of successful ambushes being sprung, and many contacts, daring which the superior training of the individual Anzac soldiers prevailed. The used of mines by both sides, made this tour a particularly dangerous one, with mines causing most Anzac casualties.

The pressure exerted by the battalion meant that the enemy was unable to mount any offensive operations in Phuoc Tuy, and he was forces to disperse due to the disruption of his resupply system resulting in reduced morals.

During its tour 6RAR/NZ killed over 260 enemy, and captured large quantities of weapons, ammunition, stores, food and medical supplies. As a result of the success of Lavarack and subsequent operations, 6RAR was granted the Battle Honour 'Binh Ba'.

Written by Lieutenant-Colonel Brian Avery, 'We Too Were Anzacs' is a story of great personal courage, determination and endurance, in a difficult war fought against an elusive enemy over harsh terrain. Details of each of the major operations mounted by 6RAR/NZ are recounted in detail, and are complemented by many photographs, maps, a nominal roll as well as a roll of honour.