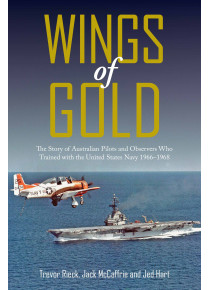 Wings of Gold The Story of Australian Pilots and Observers Who Trained with the United States Navy 1966–1968 by T Rieck, J McCaffrie, J Hart

Story of a group of young Australians who joined the Royal Australian Navy to take up that challenge in the mid-1960s. Their story is unique because, unlike those who went before them and those who followed, they were sent to the USA to undertake their flying training with the United States Navy. So began an unusual chapter in the story of the Royal Australian Navy. ‘The Pensacola experiment’, as it was called, was an outstanding success.

This book follows the young men’s initial and sometimes almost accidental encounters with the Navy recruiting office to their arrival as fully fledged naval aviators at the Naval Air Station Nowra, NSW, ready to join their first squadrons.

A mix of narrative and often hilarious personal anecdotes takes you along for the ride with the group as they land at the US Naval Air Station Pensacola, meet their host families, and learn to adapt to American culture in a huge training system that turned out thousands of naval aviators each year, many of them destined for the war in Vietnam at the time.

Readers will share in the growing sense of excitement and satisfaction as these young aviators work towards their initial carrier qualifications and ultimately gain their coveted ‘Wings of Gold’.