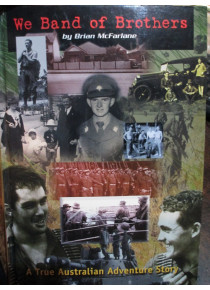 We Band Of Brothers by B McFarlane

McFarlane's military career started with Nasho training at Singleton which led to his being selected for the first intake of the Officer Cadet School at Portsea.

After becoming an Officer, he was sent to the Malaysian conflict where he commanded an infantry platoon of the 2nd Battalion RAR.

Where he led a team of Iban and Australian trackers hunting terrorists deep in the jungles of the Malay/Thai border. He later served as an instructor at Duntroon and 3 years with The Pacific Islands Regiment in PNG, ultimately as a company commander.

In 1966, he served in Vietnam with the Ist Australian Task Force and
C Company 6RAR.

Detailed accounts of the operations carried out during his military career are provided. The narrative is supported with a huge quantity of personal printed photographs. Of special interest, is the activities at the time of the Battle of Long Tan when he was serving C Company 6 RAR.

Included in the appendices is a nominal roll of those who served with C Company 6RAR and a brief history of the battalions of the Royal Australian Regiment.