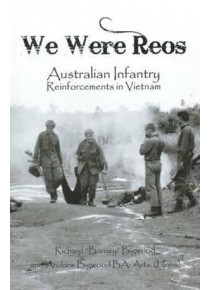 We Were Reos Australian Infantry Reinforcements in Vietnam

This book is based on the recollections of a band of, "REOS" it has many highly detailed stories of operations, battles, general life and times of being an Australian Infantry REO during the Vietnam War﻿.﻿

During the Vietnam War all Australian units except Infantry Battalions rotated fresh replacements through them as soldiers completed tours and were returned to Australia.

Whereas﻿ the Infantry Battalions trained as a unit in Australia with all members arriving and leaving Vietnam together as a unit.﻿  It was only as they suffered casualties or the national serviceman went home as determined by their term of engagement it was necessay to replace men thus the Battalion required Reinforcements (REOS).

These new REO soldiers had to demonstrate their worth to be accepted by the unit as they would be sleeping in the dead mate's bed and taking his place in the section where he was a well-liked, reliable and dependable friend. This put added pressure on 'the new bloke' as well they had to adjust to being in the war zone.﻿