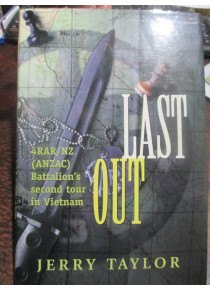 As the title of the book,  LAST OUT suggests, 4 RAR was the last of the Australian infantry forces to withdraw from the Vietnam War. The withdrawal cut short 4RAR/NZ's tour, completing eight of its twelve-month tour and was the last Australian battalion to leave Vietnam. On 7 November 1971 it withdrew from Nui Dat to Vung Tau, before departing for Australia on 8 December.

The last battles fought by Australians in Vietnam occurred during Operation Ivanhoe (18 September-2 October 1971). Intelligence reports had alerted 4RAR/NZ to the presence of North Vietnamese Army (NVA) troops in northern Phuoc Tuy. The battalion engaged the troops and became involved in heavy fighting. Although it sustained comparatively high casualties during these engagements, 4RAR/NZ was successful in hindering NVA attempts to move further south.