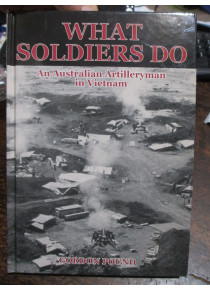 What Soldiers Do - An Australian ARTILLERY Officer in Vietnam By G. POUND

The experiences of a young gunnery officer, who began his military career in the British Army before migrating and transferring to the Australian Army. In 1965 he served in Vietnam with 105 Field Battery – the first Aussie gunners to be sent and his book tells of life in a very new and developing Nui Dat base.

They had to devise ways of carrying the guns into battle – experimenting with helicopters until they had an good system. His descriptions of life on Fire Support Bases are most vivid as they waited to be attacked by Viet Cong. Pound had a second tour in 1970 with a different battery before moving from artillery into the Civil Affairs Unit. Reading his book gives a vivid picture of what the Australian Army was like in those now far-off days.

Many dramatic and funny events occurred and this insight into a gunner’s life, fills a gap in the Australian experience of the Vietnam War.