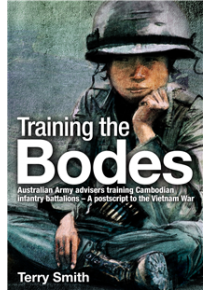 The author was a member of AATTV team which trained Cambodians during the last year of Australian involvement in the Vietnam War. He spent three and a half years on full time duty in the Regular Army, from 1970 to 1973, after volunteering for service in South Vietnam. Following training as a tropical warfare adviser, he arrived in South Vietnam on 1 July 1972 where he joined the Australian Army Training Team Vietnam. In Vietnam, he served with the Phuoc Tuy Training Battalion of the United States Army Vietnam Forces Armee Nationale Khmer (FANK) Training Command, until the completion of that programme in November 1972 and thereafter, with the Jungle Warfare Training Centre at Van Kiep.

Following the withdrawal of the Australian Army Training Team Vietnam from South Vietnam on 18 December 1972, he completed his full time military service with the 5th Battalion the Royal Australian Regiment, before returning to civilian life in December 1973.

The detailed story of a small contingent of Australian AATTV soldiers, which never numbered over 30 officers, warrant officers and non-commissioned officers of the Australian Army Training Team Vietnam. They were responsible for helping train 27 light infantry battalions of the Cambodian Army in South Vietnam during 1972. The story of these few men is told against the background of the war in South Vietnam, and in particular Phuoc Tuy province.
A number of Appendixs named list the Australians and soldiers attending missions complete this volume.